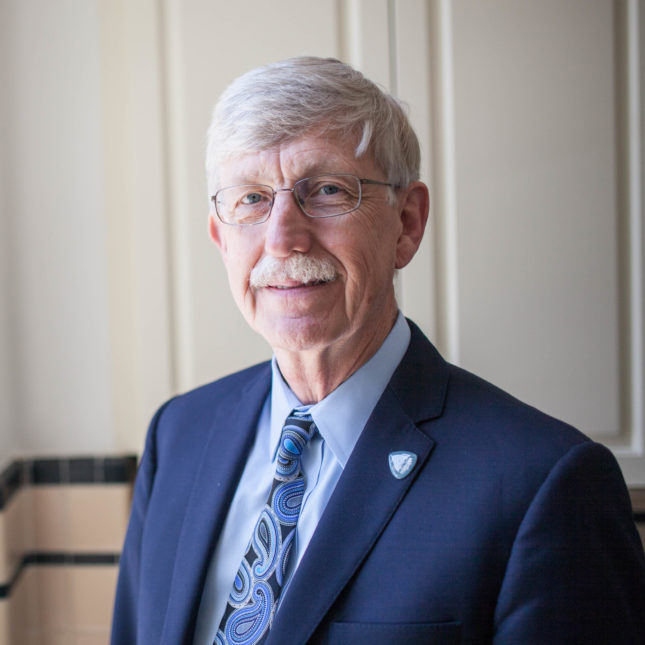 Francis Sellers Collins is often viewed as a figurehead for the unification of science and Christianity, especially in light of his book The Language of God: A Scientist Presents Evidence for Belief. As the former leader of the Human Genome Project and former director of the National Human Genome Research Institute, Collins has gained significant credibility and following in the scientific realm, which has prompted many Christians to appeal to Collins’ belief in God as an example of the congruity between science and faith. He has used this prestige to found BioLogos, a pro-evolution institution. And in recent years, Collins has used his position of scientific authority to promote the Leftist mandate agenda regarding the coronavirus. Moreover, Collins made it clear as far back as 1998 that he “does not advocate changing the law” regarding abortion, which is an unbiblical, un-Christian position. He has also advocated for the use of fetal tissue in research, and it has recently come to the public fore that he has made supportive comments and decisions regarding the sin of homosexuality. As of October 5th, 2021, Francis Collins announced that he would be stepping down from his position as National Institute of Health director, a position he has held since being appointed to it by Barack Obama in 2009.

Collins has soft-peddled the use of fetal tissue for scientific research purposes. Breaking the silence after his resignation announcement in fall 2021, Collins said in an interview that he is “pro-life” but does not have a moral problem with the use of the tissue of unborn children for science. He had this to say regarding the divide between Christians who uphold a consistently pro-life (i.e., abolitionist) morality and those who accommodate unborn infanticide via support for fetal tissue research:

““When you get into the details of a particular issue, it often turns out that the conflict that people would assume to be insurmountable can be put into a place where it makes sense; both as a person of faith who believes in the sanctity of human life and the person of science who’s trying to come up with ways that science can save lives. Human fetal tissue is just one of those examples.”

His argument for the use of fetal tissue is based on the concept of situational ethics, also known as “lesser-evilism.” Given that women already kill their unborn children en masse, Collins asserts, it would be a shame to let all that “material” go to waste. Or, more directly, Collins puts it this way:

“Suppose it was possible on a rare instance for something that’s about to be discarded with full consent after the decision by the mother to be used to develop something that might save somebody’s life. In that case, I think even God could look at that and go, ‘OK, it’s not the thing that I would have wanted to see happening. Still, as an ethical choice between discarding or using for some benevolent purpose, maybe that’s defensible.’ Now that will make some people uneasy.”

While this may surprise many Christians who have seen Collins lauded for his work in unifying science and faith by the likes of Russell Moore, Tim Keller, Ed Stetzer, and N. T. Wright, he had already made his position clear on the subject in a 2020 CNA interview, as well:

“I would be the first to say we should not be creating or destroying embryos- human embryos- for research, and we should not be terminating pregnancies for research. But if there are embryos that are left over after in vitro fertilization- and the hundreds of thousands that are never going to be used for anything, they’ll be discarded- I think it is ethical to consider ways in which research might make it possible to utilize that information to help somebody. And likewise, if there are hundreds of thousands of fetuses that are otherwise being discarded through what is a legal process in this country, we ought to think about whether it is more ethical to throw them away, or in some rare instance to use them for research that might be life-saving.”

In other words, while Francis Collins does not advocate for abortion directly for the purpose of utilizing unborn human tissue for research, Collins does advocate for the use of the tissue of unborn people that exist as a result of in-vitro fertilization, so long as they would have otherwise been “discarded.” In his worldview, it would be a “waste” of scientific resources not to use unborn fetal tissue. In a way, then, the logical conclusion of Collins’ view is that the bodies of all unborn human beings should be used in research, so as to not let them go to waste.

This view is abhorrent because it seeks to utilize murder for the purposes of science, regardless of whether Collins advocates for abortions directly. It gives a false sense of utility to what is truly a senseless, useless, un-Christian act of violence and murder.

Collins’ Views on Homosexualism and Transgenderism:

In June of 2021, Francis Collins promoted sodomy and transgenderism through a letter from his official position as the director of the NIH. He spoke about his support for “pride month,” cheered those who are open homosexualists or transvestites, and bemoaned his relative lack of experience as a “White cisgender and heterosexual man.” Rather than upholding the Biblical position on sodomy and crossdressing, Collins revealed that it was his intention to prioritize the voices of those who are stuck in their sins, rather than the voices of those who have been freed from sin by the grace of the Holy Spirit. He also made it clear that he will utilize science for the express political purpose of supporting those in the “LGBT-etc.” array of sinful behaviors.

Here are some quotes from the letter, which you can read here:

• “I am excited to share this year’s Pride theme, Allyship in Action.”
• “In my view, NIH can demonstrate leadership and have a significant and positive impact on the lives of SGM [sexual/gender minority] individuals by using science as a form of allyship.”
• “Similarly, our Office of Equity, Diversity, and Inclusion (EDI) [or, more accurately, DIE] has been coordinating education, cultural awareness programs, and other activities via a designated Principal Strategist…”
• “We know that SGM individuals, especially those of color, are at greater risk of encountering experiences of discrimination and harassment. For that reason, we are constantly striving to ensure SGM voices are welcomed and integrated across the numerous steering committees and working groups for these initiatives.”
• “One of the best ways we can reaffirm our commitment to these principles is by exemplifying our allyship for SGM people through inclusive science.”
• “I hope that you join me this Pride Month in exemplifying allyship and celebrating the broad diversity of SGM communities.”

In September of 2021, Francis Collins was interviewed on Ed Stetzer’s podcast on subjects ranging from COVID-19 to CDC mandates to transgenderism. Stetzer prompted a conversation on the CDC’s usage of the term “pregnant person” over the term “mother,” which is a nod to the transgenderist view that women are not the only ones who can become pregnant. He inquired about how evangelicals could trust the CDC’s guidelines on COVID-19 when the CDC made such statements that were blatantly Rather than upholding the Biblical position on the issue, Collins avoided discussing it directly, opting instead to vaguely emphasize the fact that “all human institutions have flaws,” and to prompt his listeners to “look past that,” and simply trust the CDC and secular institutions on the subject.

Given Collins’ letter on homosexualism and transgenderism, it should not surprise the educated Christian that Collins would not denounce the CDC’s neo-Gnostic rejection of sexual reality. Rather, his lack of direct commentary in the interview with Stetzer is indicative of his agreement with the CDC’s radical Leftist verbiage.

Collins on COVID-19 and Church:

Francis Collins, as the director of the NIH, was (and is) instrumental in the development and promotion of mask and vaccine mandates, especially among evangelical Christians. Moreover, he has promoted the opening of schools to in-person classes while simultaneously degrading the importance and necessity of the Church. On February 1st of 2022, Megan Bashan of The Daily Wire wrote a piece entitled “How the Federal Government Used Evangelical Leaders to Spread Covid Propaganda to Churches,” which our readers can access here. She rightly and factually evidences this claim with special attention to Collins’ influence and involvement in the NIH.

In an interview (again, with the same Ed Stetzer), Collins proclaimed the following:

“The consequences of missing out on that personal interaction for educational progress, for social interactions, just for human development as a child are really significant. Those of us who are adults that are missing our church gathering, we’re suffering too. But if I have to make a priority, it’s getting those kids in school is even higher in my list…”

The clear implication here is that, in Collins’ view, Church is not nearly as important as returning children to the public school system. Spiritual education is not, per his own admission, the higher priority. Instead, reopening in-person classes takes the higher priority, and efforts to open churches are viewed as secondary. Moreover, Collins promoted the view that children should be forced to wear masks upon reentry into the school system, arguing that “If we don’t have mask wearing in school, it’s guaranteed we’re going to have outbreaks and then the kids will be back home again, doing the virtual thing that we were trying to avoid.”

“If we can have kids sitting in desks and follow mitigations, can we do that in church?”

To which Collins responded:

“We can do it. And again, the question is, what’s the risk? And how strongly do we feel that that risk is worth taking? If Christ’s strongest recommendation to us; how love the Lord your God with all your heart, all your soul, and all your mind, we’re supposed to use our mind about this. And of course, the next is the commandment: ‘Love your neighbor as yourself.’ This is a ‘love your neighbor’ circumstance. Because if you are gathering in person, in a church, even being careful about it, there may be somebody sitting there who’s got an immune deficiency. Maybe they know it, maybe they don’t. And then that individual, despite thinking they were protected, turns out to get COVID, ends up in the ICU and maybe loses their life.”

This is a typical scaremongering tactic utilized by Leftists and idolators of the scientific establishment to shut down churches, and to keep their doors from opening. It is not based on the Biblical injunction to love one’s neighbor, given that the highest form of love would be to sacrifice one’s own health to reach out to those who are spiritually sick and in need of the salvation offered by Jesus Christ.

Collins also revealed to Stetzer that his strategy has involved utilizing pastors to directly manipulate the laypeople in the pews to promote the official COVID-19 propaganda narrative of the NIH, saying ““I want to exhort pastors once again to try to use your credibility with your flock to put forward the public health measures that we know can work.”